Opened my e-mail this morning and read this:
To:
Teresa Marceaux
Tuesday, May 12, 2015 11:37 PM
Hey Mrs. Marceaux you probably don’t remeber me but then again you may who knows, but I was in the steps program last school year. I’m a 2014 graduate from sulphur high and I Just wanted to share this image with you that me and another class mate of your English class were just discussing and I just wanted to let you know you were a great teacher and if there were more teachers like you out there the world would be a better place. I still remeber the whole story to The Perfect Storm even though I really didn’t want to read it haha. Well I hope you’re doing well! 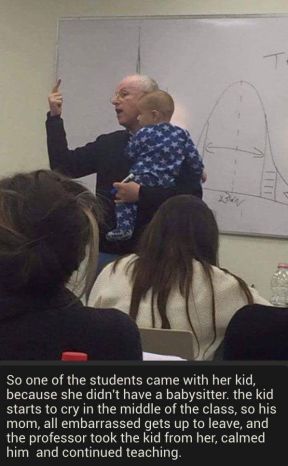 Last year one of our STEPS students had trouble finding a babysitter for her infant son, so instead of missing school she would bring him with her to class. Yes, it could get disruptive; a toddler can not sit silently through a 50 minute class. I admired the girl’s grit, (Mom was a druggie with a bunch of “boyfriends” hanging around, the “baby-daddy” was in jail on drug possession charges) so while I was conducting class, I’d pick the baby up and carry him around the classroom or spread big sheets of easel pad paper on the floor and give him a highlighter to keep him occupied for a little while.  The other SOWELA professors were also understanding (at least at first) and made similar accommodations. I guess we made more of an impression than I realized.

Hyperbole and a Half

The Art and Craft of Blogging

The latest news on WordPress.com and the WordPress community.